ADI training scams are something that, sadly, I hear about all the time.

There are many great trainers and companies out there who will train you to be successful as a driving instructor. Unfortunately there are also cowboy companies who just want your cash and couldn’t care less about what happens to you.

None of these points are about any specific school, they are general points to watch out for whoever you choose to train with.

Before we continue, I’d like to point out that the word “scam” means different things to different people.

Call it a trick, a misleading thing, a scam, a con or whatever you like. These are just points I think you should know about.

You may not be fully insured in your own car

If you do part 2 or 3 work in your own car then you’re often only insured at 3rd party level and not fully comprehensively. That means that if you crash while training your insurance would only pay out the damage for the other persons car, not yours. In the event of an injury or damage to your vehicle you could be left thousands of pounds out of pocket.

You’ll usually be insured at 3rd party level so long as your trainer has part 2 or 3 cover on their own policy. I have heard of trainers that don’t have that meaning all of their training in your car is totally uninsured. They just assume they’ve covered or that you’ve sorted it out.

If you take part 2 training in your own car then you MUST contact your insurers and check that you’re fully covered. Many normal car policies only cover you for social, domestic and pleasure use of your vehicle, not tuition or business use.

It’s incredible how many people contact me for ADI part 2 training and can’t understand why I’m asking them if they’re insured for part 2 work. They call up their insurers and find out that they haven’t been fully insured for any of the sessions they’ve done elsewhere!

If you haven’t taken out part 2 insurance then you may not be covered for the part 2 test in your own car either.

Some trainers know this but won’t tell you. You are legally insured after all but they don’t care that you could lose your car and even be left paying for it on finance for years when you don’t have it. So long as they get their money for the lesson they’re happy.

Promises of a guaranteed job

This is one of the most popular ADI training scams.

If you’ve been looking into ADI training you’ve no doubt seen things like “Train with us and we GUARANTEE you a job with our school!”.

When you work for a driving school you pay them a set amount to be supplied with a car and work. It’s usually around £150 to £200 per week.

There’s a very important in the paragraph above that I want to repeat: you have to pay this £150 a week WHETHER OR NOT YOU PASS. Even if you fail the exams you could still be paying out for a franchise you don’t have.

“Guaranteed job” really means “Guaranteed debt”. Once you’ve signed up on a minimum 2 year contract they’ll just throw you in the keep net and forget about you. You’ll often get no work, no contact, nothing at all because once you’ve signed they’ve got you. Keep paying that £150 a week though or else.

Have you seen offers like “Train with us and we’ll refund your training”?

The huge catch is that you have to pay between 6 to 24 months of franchise fees to the school no matter whether you pass or fail. Here’s an example of exactly how much this can cost you.

You train with a school and fail at the part 3 stage. This is highly likely to happen as the pass rate for part 3 exams in Birmingham for 2017/18 was just 21.6%.

The next week you get a bill through the post for £7,800. This is because what you unwittingly agreed to was that you’d pay them a years franchise fee at a cost of £150 per week.

If we multiply £150 by the 52 weeks of the year that’s £7800. The fact that you have failed part 3 and have no job doesn’t matter to them. They will start legal proceedings through debt collectors to get the money and it can even result in your home being repossessed. Have a search online and you’ll see that this has happened to people.

It can end up costing a lot more than this. You can be tied into a two year deal with rates higher than £150 per week. Imagine if you signed up for a £200 a week franchise for 24 months; that’s £20,000 you’d owe if they were nice and have you two weeks free each year for holidays.

I don’t think they actually don’t want you to pass your part 3 because then they don’t have the hassle of finding you pupils. They just want your money. This became an even bigger problem when the recession began. The dodgy companies knew people were getting thousands in redundancy payouts and they were out to get it.

Anyone can be a driving instructor trainer

Surely they’d have to be an instructor themselves? No.

Surely they’d need to at least pass a course? No.

Surely they must at least have a driving licence? No!

Anyone can just have a go; even someone who’s never done the job, never passed any of the exams and can’t drive!

The only legal protection you have is that nobody other than a driving instructor can take money for driving tuition. To get around this they either contract part 2 work out to instructors or do that part for “free” and add the cost into part 1 or part 3. The DVSA are trying to close this loophole by making ORDIT compulsory but that’s been going on for years.

You can make big money by selling training. Many people will happily pay £2000 up front so if you can get 10 people you’ve just made £20,000 overnight. Then comes the awful training and the failed exams.

Not all schools and trainers are like this but this is what can happen. I know because I’ve met people that have had it happen to them.

This is one of the ADI training scams that some places like to keep quiet about.

It might seem a great idea to work as an instructor while you’re practising for ADI part 3. You can earn some money and get experience but there are some drawbacks that schools won’t tell you about.

Once you have your trainee licence you are tied to the school that is sponsoring you. You cannot leave or your licence will be taken away so the school has you right where they want you. They could increase the franchise fee every few weeks and there is nothing you can do. You are stuck with them. The only way out is to find another school that will take over the sponsorship but guess what? They’ll do just the same.

Finance offers can turn out to be very expensive. You are offered the chance to pay nothing until after your training is finished.

It seems a good idea but the payments can be spread out over 4 years at 29.9% APR.

With that amount of interest you could end up paying back DOUBLE the amount that you borrowed. You pay whether you pass or not. You may fail at part 2 and not even get to ever teach as an instructor but you’ll still owe over £8000.

Some schools have contracts that are so hard to understand that you have to pay a solicitor £200 to read through it with you. If you don’t then expect big trouble. You may have just signed up saying you’ll stay with the school for a minimum of 2 years, will pay them a leaving fee or any other silly thing.

The aim of driving schools is to get as many cars on the road to earn more money. You’re lucky to get one new pupil a month sometimes because they spread pupils out so thinly.

If 50 new pupils contact them in one month then they’d rather give 50 instructors 1 pupil each than giving about 10 instructors 5 pupils each.

There’s been a lot of text on this page so let’s have a look at one of the funniest things some trainers say. I’ll use some images to show you why it makes sense!

No there isn’t! What does this mean? It makes it sound like there aren’t enough people teaching and that learners are waiting months to start lessons – absolute rubbish.

Look at this map below taken from Google maps for “Driving school in Birmingham”. 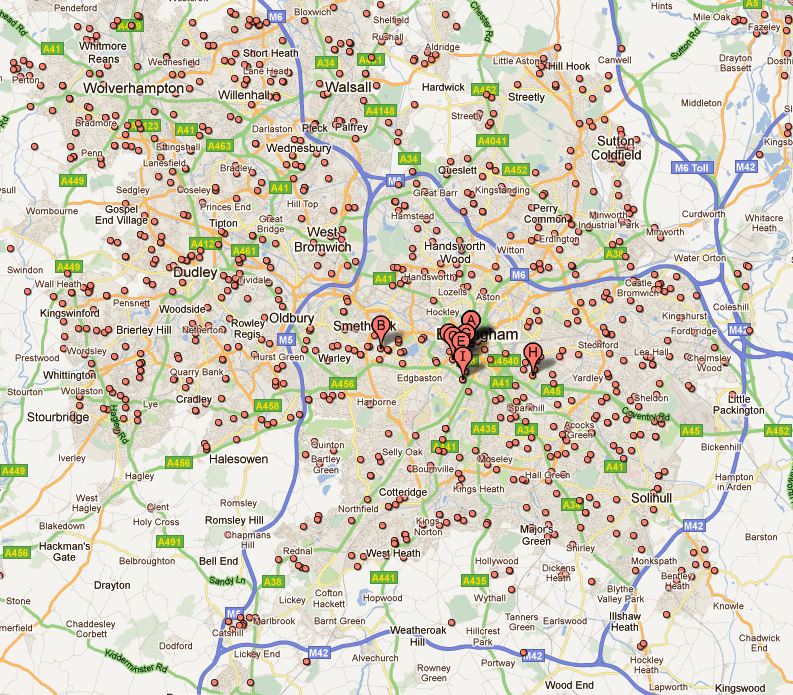 Does that look like a shortage to you? Just look at all those red dots. Hold on though, that was only page 1 of many. Don’t forget also that some of those dots are schools, not instructors. Each dot could have 30+ cars on the road. Don’t forget to add in all the trainee instructors too. With all that the map would look like this… 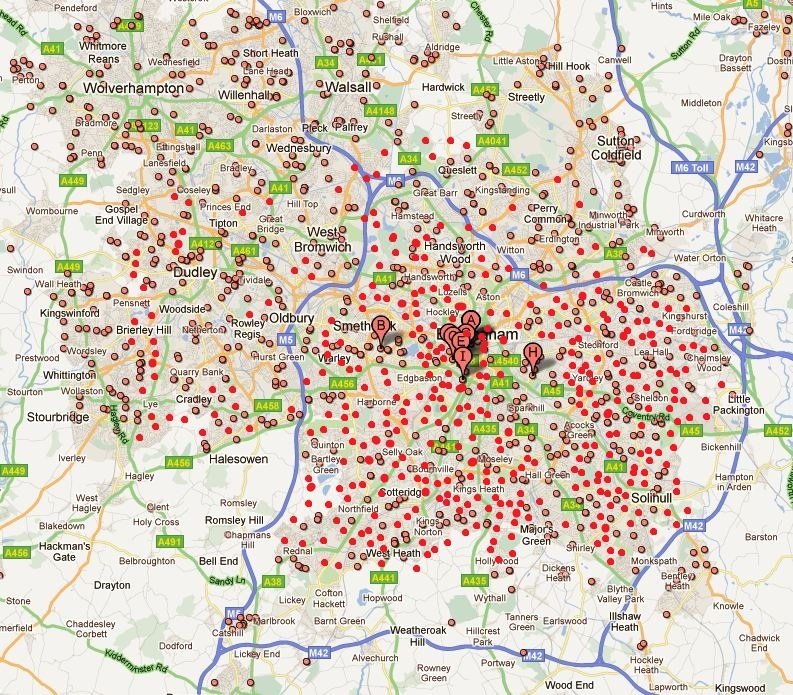 Official figures from the DVSA showed there were 1,534 instructor in postcodes starting with B in 2019.

There are 2000 miles of road in Birmingham and 1,534 instructors. That’s almost one instructor for every mile of road!

Here’s what it looks like with about 600 dots on. I got sick of clicking after that so this still isn’t even HALF the number of instructors in Birmingham.

A national shortage of driving instructors? No chance!

Just try telling people that you’re a driving instructor. They’ll often say they did that once, their neighbour is doing it, their friends are doing it…

You’ll get sick of hearing how EVERYONE is training to be a driving instructor, or did it at one point in their lives.

Not all of us use ADI training scams!

The aim of this page is not to put you off becoming a driving instructor. I just wanted to make you aware of things that I think are important to be wary of. There are many good companies that put good instructors on the road.